Dynamic Footy Skills gives junior footballers the ultimate AFL experience, in addition to elite coaching and development they learn from those who have made it.
Many AFL stars are regular visitors to DFS development programs, passing on their knowledge to the next crop of young guns.

Marcus Bontempelli was picked up by the Bulldogs at pick 4. The former Northern Knight is known for his silky skills. His sure hands, efficiency around the contest, and ability to finish have seen him quickly establish himself as one of the stars of the competition. ‘The Bont’ has been mentored by several DFS coaches, including Tala, JC, Pottsy and Dazz.

Jade Gresham was drafted to St Kilda in the 2015 National Draft with pick 18. A move to the midfield In 2019 saw Gresham finish in 6th in the St Kilda Best and Fairest award while Jade was also rewarded for his strong form with a spot in the 2020 Bushfire Relief game representing the Big V. Jade has previously attended DFS programs including the 2018 Elite Summer Training Program train & tour at the state-of-the-are Moorabbin facilities where Jade was able to mentor DFS players and catch up with former mentors Director of Coaching, Adrian Talarico and head coach Corey McCall.

A junior player with DFS partner, the YJFL, Kyle has become an important player for the Essendon Bombers. Drafted in the 2014 National Draft, Kyle plays in the midfield and forward, showcasing an ability to kick goals when they matter. DFS is proud to have Kyle as a DFS ambassador with Kyle having appeared at the 2017 Elite Summer Training Program train & tour at the Hangar. Most recently, Kyle made an appearance at the YJFL Summer Development Program that was designed and delivered by DFS.

After an outstanding debut season for Richmond, the tough young half back has earned a reputation as one of the most courageous players in the competition. The former Eltham and Northern Knight was selected in the 2012 Draft at pick 9. He earned a rising star nomination in Round 7. He captained Vic-Metro at the 2012 Under-18 Championships. He has also won All-Australian honours. Adding to his list of achievements Nick is a 2x premiership player with Richmond. “Tigger” has been coached by several DFS staff, including JC, Tala, Pottsy , Joel and Dazz.

Todd Goldstein is one of the game’s premier ruckmen, his supreme tap work and endurance makes him a vital component of the North Melbourne midfield. As a junior out in eastern suburbs of Melbourne, he was also a serious basketballer during junior days. He drafted from the Oakleigh Chargers as pick 37 in 2006 Draft for North.

Selected at pick 69 by the Hawks, Taylor Duryea is now a 2-time premiership player at Hawthorn. After a bumpy start to his AFL career, the defender has impressed fans and teammates with his courage, and pinpoint left boot. He was recruited from the Murray Bushrangers. Taylor Duryea is now a Western Bulldogs player after being traded at the end of the 2018 season.

Jack Ziebell was selected at pick 9 in 2008 National Draft by the Kangaroos. He made his debut straight away in 2009, earning himself a rising star nomination. Well known for his courageous attack on the ball, he also knows where the goals are kicking 20 goals in 2013. The hard inside midfielder, originally from Wodonga, is the captain of his club and has been since 2017.
m

The former Eltham junior and Northern Knight was selected at pick 23 in the 2008 draft. David Zaharakis is now a crucial cog in the Essendon midfield. He has blistering outside run and goalkicking ability. In his third year of league footy, he won the club’s best and fairest in 2011. He is also proven on the big stage having kicked the winning goal in the 2009 Anzac Day match and then winning an Anzac Day Medal in 2013.

Despite some bad luck with injuries early in his career, Dylan Grimes is a key figure in a strong Richmond defensive line. He grasped his opportunities after being picked by in the Tigers in 2010 pre-season draft, from the Northern Knights. In 2012, he earned a rising star nomination. He is now a 2x premiership player at Richmond and in 2019 he was awarded with selection in the All-Australian team.

The former Macleod and Northern Knight is one of his side’s most important players down back. The key position utility was selected at number 5 in the 2008 draft. A fierce competitor Hurley earned rising star nominations in 2009 and 2010 and made the All-Australian team in 2015 & 2017. Hurley is also an Essendon life member.

Drafted by the Tigers in the 2012 National Draft at pick 32, the West Australian has had to wait until 2015 to make his debut. He was one of the best on ground in his debut game, earning a Rising Star nomination. The running defender has overcome shoulder and foot injuries to secure a place in an improving Richmond side to become a premiership player in 2017.

Kevin Sheedy is a 3-time premiership player with Richmond, but is most famous for his role as senior coach of Essendon where he won 4 premierships for the Bombers. A Hall of Fame member who coached Australia in the International Rules Series, Sheedy was also the inaugural coach of the Greater Western Sydney Giants. Sheedy was the special guest at the 2015 Elite Summer Training Program Induction Evening. 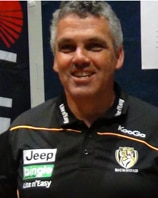 Mark ‘Choco’ Williams has nearly done it all. As a coach, he steered the Power to minor premierships from 2002 to 2004, then banished previous September disappointments, winning the big one in 2004. After a couple of years with GWS, he moved to Richmond as their head of development in 2012. in September 2018, Mark Williams joined Werribee FC in the VFL as head coach.
What he says about DFS:

“I can’t believe how professionally run it is. I think it really gives the kids a great insight into what to expect in footy. And if it improves their footy whether it’s local or under 18, or eventually the AFL, it’s a great start.”

Appointed in his first senior AFL coaching job at the end of 2013, Richo was entrusted with the task to rebuild the Saints. During his playing days he played for Collingwood. He has vast experience in a variety of coaching roles at five AFL clubs before joining the Saints. He first cut his coaching teeth at his original club East Burwood, winning two premierships. After time with Richmond’s old VFL aligned-club Coburg, he joined the Western Bulldogs in 2004. Two years later he joined Mick Malthouse at Collingwood. After stints with Essendon and Carlton, the highly-regarded Richardson was seen as a senior coach in-waiting when he joined the Ken Hinkley at Port Adelaide in 2013. Richo Is now the Director of Coaching at Melbourne FC.

“Rocket” was appointed the head coach at the Gold Coast Suns in October 2014, chasing that elusive first Premiership as a Senior Coach. A four-time Premiership player at Hawthorn, he has learnt from some of the coaching greats – John Kennedy, Allan Jeans and Leigh Matthews. After the success at Hawthorn, he spent time at the Brisbane Bears and eventually fell into coaching and won a reserves premiership in his first season as a coach.

As a senior coach, he guided Sydney to a Grand Final in his first season and three consecutive preliminary finals appearances with the Bulldogs. And after three years at Collingwood, his desire to be the senior coach was met with the Suns appointment.

Selected at pick 21 in the 2012 Draft, Nathan Hrovat impressed in his seven games in his debut season.  The former Northern Knights captain also shows a good level of maturity and composure with his outside flair, and at the end of 2016 was traded to the North Melbourne Football Club.

Hamish McIntosh is originally from Lavington near Albury-Wodonga and was selected at pick 9 in 2002 draft by North Melbourne. The big ruckman made his debut in 2005 after injuries hampered his early years in the AFL. Despite the setbacks, his athletic ruck-work saw him get nominated for the All-Australian side in 2007 and 2009, before being traded to Geelong.

Another player who proved doubters wrong, he worked his way through VFL and WAFL footy with Williamstown and Claremont. After two years on the Magpies’ rookie list he was promoted onto the main list in 2007. Playing as a defender, he was Collingwood’s first choice to quell oppositions’ dangerous small forwards. In 2010, he played every game and played in the 2010 premiership side.

Tyson had to make it the hard way, after being overlooked as an 18 year old in the National Draft. In 2006 he was the number 63 pick after a solid season with Gippsland Power as a 19 year old. He was a  member of the Magpies leadership group, Goldy kicked the first goal in the 2010 Grand Final Replay, making him a premiership player with a great story.

Nathan Grima is a versatile defender who was picked up in the 2007 Rookie Draft, after winning a SANFL premiership with Central Districts. Originally from Launceston, he became an important part of an emerging Kangaroos back-line. He provided footy fans with one of 2013’s lighter moments with his energetic celebration after his kicking his first goal of his 72-game career. Nathan retired in 2015 due to a back injury and is now coaching Sturt in the SANFL.